In the previous game of the campaign, pGrim landed a casterkill on eIrusk. The movement of Khador forces got stopped and the Trollbloods are preparing on a counterattack on the Khador camp in front of the Thornwoods.


The Trollbloods had to catch the flag in the Khador camp (move B2B) within five turns or the Khadorese would win.


The Trollbloods had a five points advantage because they pGrim quickly assembled additional forces while Khador was busy carrying eIruks into their camp.

On their first turn, the Trollbloods quickly advance forward. At this point, my plan is to tie down the MOW Shocktroopers with my Kriel Warriors not caring if they are gonna die or not - as long as they keep the Shocktroopers off my beasts.

On their first turn, Khador advances as well. Yuri on the right side, in this game with +2 P against warbeasts, is appearing like a gift from heaven for pGrim's Headhunter gun.

The second turn ends up perfectly for the Trollbloods. pGrim shoots Yuri, the Boomhowlers tie down the Drakhun, and the Kriel Warriors move in to block the Shocktroopers. At this point, I am very confident to win the game by sneaking someone around the camp to the flag. Tudor is growing desperate.

Khador's second turn, however, goes really well for them, too. The Drakhun and the Kodiak kill half the Boomhowlers and the Shocktroopers quickly wipe out the first row of Kriel Warriors. Also: eIrusk feats. 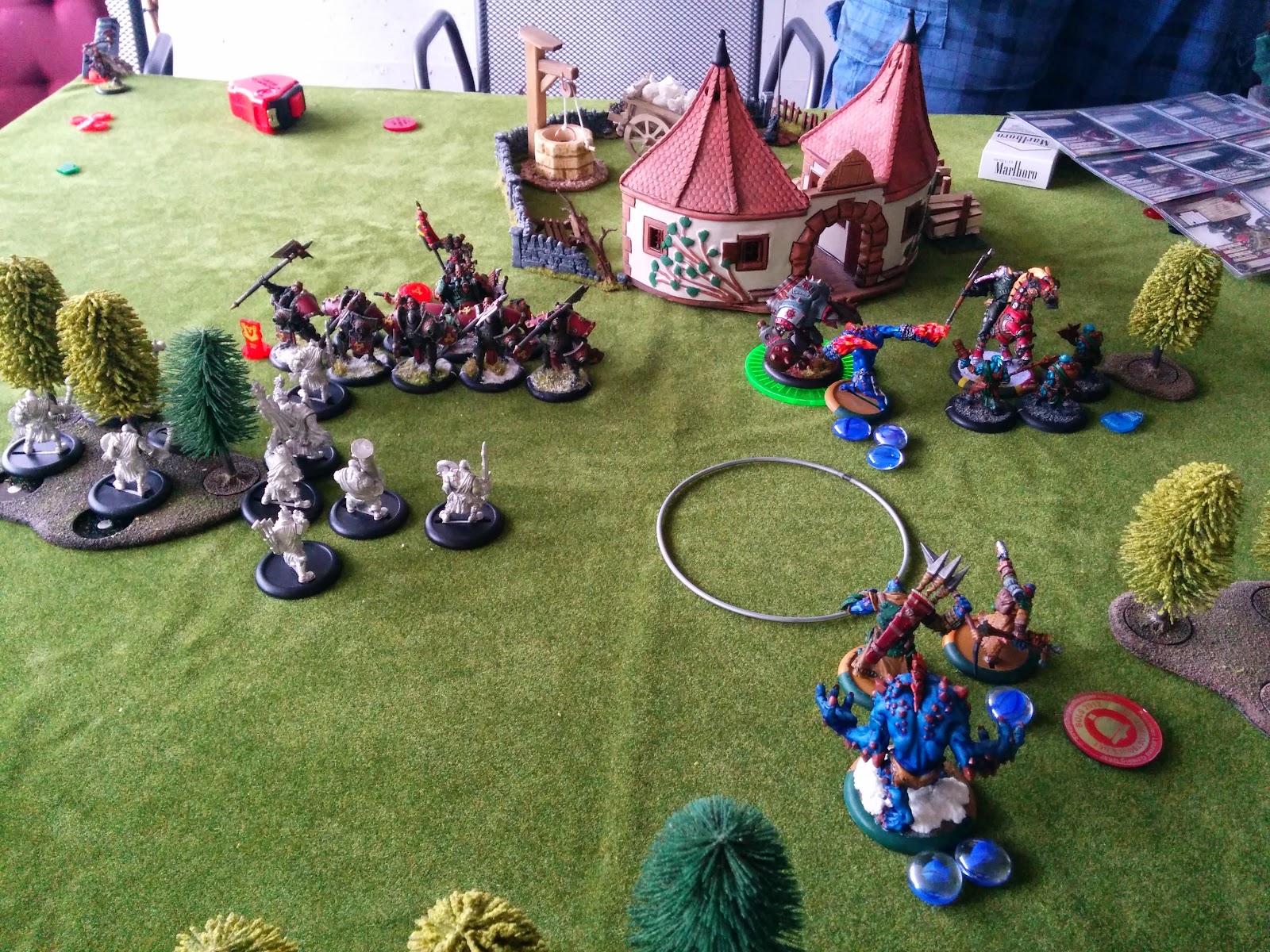 In the Trollbloods third turn it was me getting desperate as I headlessly tried to cope with eIrusk's feat. The Impaler stood and aimed, but fell short because my guessing wasn't accurate enough, so he just stood for one round doing nothing. The Mauler was fully loaded with the Pyre Troll animus and Cross Country when I realized he could still not charge because of eIrusk's feat, so I moved him back instead because I was too afraid Shocktroopers may charge him in return. pGrim also feated on this turn to hold of Khador for one more round.
The only success in this round were the Boomhowlers bringing the Drakhun down to zero live points, but because Tudor continued to make a couple really good Tough rolls, the Drakhun still stuck around for a while.

Khador's third turn saw the killing of more Kriel Warriors aided by the Widowmaker Marksman. With pure luck the Pyre Troll survived the battle with the Kodiak and will heal by snacking Whelps in the upcoming turn.

The Trollbloods 4th turn didn't see much action as the Mauler was too far in the back to charge the Kodiak. More Kriel Warriors died. However, pGrim (once again) shot and wounded eIrusk, but the Impaler missed despite boosting his shot as usual.

In their fourth turn, the Shocktroopers anything but kill the Kriel Warriors. The Kodiak sadly finishes off the Pyre Troll (bye bye animus), but the Drakhun and the Boomhowler remain locked in their eternal struggle. eIrusk is moving back into his camp to remain out of pGrim's LOS.

In their fifth turn, the Mauler charges in, finally kills the Drakhun and start to rip apart the Kodiak.

In their firth turn, the Shocktroopers break away from the remaining Kriel Warrior (who was probably shot later by the Marksman).

Technically, the game should have ended here. However, since we were cruising in ultra casual mode we forgot to set up a turn counter. ^^ Counting the pictures on my phone I believed it was the end of the fourth turn, so we played another one. :-D

In their sixth turn, the Mauler gets the Kodiak ready for the junk yard. pGrim moves up and kills the Shocktrooper closest to him...

...while the remaining Boomhowler mounts his running shoes and goes for the flag.

Unfortunately, on Khador's sixth turn eIrusk moves around the corner and flattens him...


Consequences of this game:

Eliminating the first Trollbloods defensive wave, the Khador forces will raid a Kriel (village) in the Thornwoods in the next game. Tudor even started modelling a Trollkin baby to motivate me a bit more to defend said village. o.O

Irusk will be back at full health, but Yuri (shot by pGrim) and the Drakhun (killed by the Mauler) won't be in the game anymore. Havinf the advantage on their side now, Khador will get an additional Widowmaker Contingent on top of the 35pts we are going to play next. :-)

On the Trollbloods' side, Grim will be missing and will have to be replaced by a different warlock. Currently I am considering pMadrak. :-)
Posted by Parcival at 22:00 0 comments


WM/H gaming has really slowed down for me as Dystopian Wars continues to be my current #1 game plus I got sick of the local/national competitive meta. So what to do in this situation? Tudor and I agreed on starting a narrative WM/H campaign instead. :-D

The story arch behind this campaign is Khador trying to find a way through the Thornwood to move from Llael into Ord. There is neither a complex reward/punishment system nor a set of consecutively planned games, Tudor and I just chat everything up on the go.

Supreme Kommandant Irusk is being trusted with the task to lead an army through the Thornwood forest. As a smart Kommander he isn't blindly leading them through that forest, instead he moves in with a small scouting band first. With him are his trusted Man-O-War Shocktroopers and Battle Mechanics, a Man-O-War Drakhun as well as a Kodiak.

On the receiving end, there is pGrim being alerted to the intrusion of enemies in his wood as he moves around with his ranging party.


So for game 1, the Khadorese are trying to enter the Thornwood whereas pGrim wants to keep them out. We agreed that we basically just play a simple caster kill scenario, but the Khador forces should try to reach the Trollbloods' edge of the table whereas the trollbloods should eliminate everyone so no messager can go back to the Khador main host.

Let's see how it goes.

In round 1, the MOW Shocktroopers move up surprisingly quickly because they run for 8" plus get an additional 3" with eIrusk's Tactical Supremacy. Yuri is hiding behind the wood on the left.

The Trollbloods moved up as well, but other than pGrim's shot with the Impaler's animus every ranged attack was short.

Yuri, who was hiding behind the wood the previous turn but is now equipped with Pathfinder, Battle Lust, and Weaponmaster, charges the first Impaler and kills him with one strike. Sounds like this nice little stroll accross the wood bridge wasn't so happy after all.

For the rest of their turn, the MOW Shocktroopers advanced some more while the Drakhun crashed into the lines of Kriel Warriors killing one.

For the rest of their second turn, pGrim popped his feat and was taking insignificant shots at the MOW Shocktroopers again.

Because of pGrim's feat, the Khador band moved forward at a slow pace, so rather than doing deadly close combat attacks the MOW Shocktroopers resulted to their Shield Cannons.

On their turn, the Kriel Warriors and the Pyre Troll charged the MOW Shocktroopers, but only the buffed Pyre Troll was able to do any form of significant damage to them. In the meantime, eIrusk's feat kept the flanking Boomhowler & Co. away in the top right .

In their fourth turn, the Kodiak decided to turn right and support the block against the Boomhowlers. In the center the Kriel Warriors continued to be fed into a close combat that was impossible for them to emerge from as victors. Also, eIrusk moved into the wood on the top left because he felt saver there.

Save my ass - pGrim doesn't care about character models standing in a wood. He aimed, shot, hit, and wounded.

On his turn, eIrusk decided to go all in and charged pGrim. However, pGrim only lost half his hitpoints due to his amazing DEF 16.

On his turn, pGrim killed eIrusk in close combat as his six FUR proved to be just enough to bring eIrusk down to 0 HP in melee.

Consequences from this game:

We decided that eIrusk was severely wounded and had to retreat to his camp in front of the Thornwood. In his next game, he starts with 3 HP down.
Yuri gets +2 P against warbeasts because he sliced through the Impaler so mercilessly.
The Drakhun gets the Taunt rule because he was able to significantly shatter the Kriel Warriors' lines.

On the Trollbloods side nobody performed exceptional deeds, so we counted the casterkill as +5 Army Points for the Trollbloods in their next game. pGrim saw an opportunity to raid the Khador camp, so while the Khadorese were busy carrying back eIrusk into their camp, eGrim would quickly muster additional forces.
Posted by Parcival at 21:31 0 comments

Back from a four months hiatus


Haven't posted in a while simply because I didn't play any games - Dystopian Wars was too attractive for a change. Since I am in the Swiss DW Cup I am still gonna play there, but tonight I played my Trollbloods again.

The game was ok because Gergely brought beautiful models and I still love my Trolls, but this taught me once again that there are no easy wins in WM/H - so if you have a thirst for winning, it's gonna be a long road.

We agree to match up my pDoomshaper T4 list with +Gergely Gati's eKaya. I knew they were going to teleport the hell out of me, so my basic plan was to create a belt of Runeshapers and Whelps to block their movement to my juicier Trolls.

Last night we were playing at the Tactica FLGS that we don't get that often to because it's a primarily 40K bunker. However, +Andreas Balmer was int he mood for a game and four more joined, so we basically steamrollered the place. While playing I overheard this dialogue:

At the end of the evening some guy even purchased a Convergence battle box, let's see we can play him soon. :-D

My game against +Andreas Balmer went pretty bad - he basically had nothing other than the Thunderhead to really kill any of my warbeasts in Runes of War, but he simply outmaneuvered me. (the objective markers on the images count as flags in Incursion.)

Here, both the scenario and the board were a problem for me because I had no mini with a base small enough to go through that stone arc in the center. I figured I would do well enough passing the arc on its left side with my heavies, but especially once the left flag had disappeared I had 30pts of my army doing nothing for most of the game.

At this point I did another really bad mistake: all my warbeasts were full on fury with eEiryss sneaking up into pDoomshaper's back - if anybody had hit him, he couldn't have transferred damage. I really need to remember that for the future.